My website, https://thebotfactory.net has been getting 50% warnings recently, saying IO warning.

Does anyone know what this relates to exactly? Is it disk access?

Yesterday I got this suspension message, saying that I had exceeded the limit (it went just over 100%)

The resources that your site has over used are :

I’m running Joomla. Does anyone know how I can make it more efficient? On every other stat I’m no where near 50%. But for IO usage I’m obviously topping out now. Either the stat is awfully low, or else there’s something running that is inefficient.

This article explains a bit more:

What does the IO limit mean Fair Usage Limits

One of the limits enforced by InfinityFree is the “IO limit”. This article explains what this limit means, what usually causes it and what you can do to prevent reaching it. What does IO usage mean IO usage measures how much the PHP code on your site interact with the hosting storage. It’s usually measured in MB per second. Your website generates IO usage for example when uploading files on your website using a built-in uploader (such as the media manager in WordPress) or when installing plug…

I may have to upgrade to premium . . But won’t even consider upgrading if such limits are shrouded in military-grade secrecy!

I’ll try disabling the backup system and see if that alters it. Although I don’t recall configuring automated backups and I haven’t initiated a backup for a few days. This limit was reached without me using my site since last weekend. There was a day last week when I did a number of backups and upgrades, none if which caused the limit to reach 100%, so I do find it strange that it was hit yesterday all on its own.

I’ll have to do some investigating, but thanks for the extra info, it was informative.

That will cause it. Sometimes the counter is deyaed in showing you results.

But, mefirnd, thats my point - it DIDNT do it! This suspension is unrealted to all my backups! The backups took place several days ago. As long as you do not reach 100% in 24hrs, then it resets, I hadnt done a backup or days. But suddenly, boom, suspended.

Just a heads up, I do have a PHP plugin installed to my joomla backup suite, but my incremental backups are done on a nightly basis using FTP, so from what I have read these will have no bearing on the IO stat

There is a list of my current stats from the control panel. As you can see, I’m approaching 58% ionodes used, but hits say 1%.

I’ve dropped error reporting from MAXIMUM - I assume this will be doing lots of disk read-writes. 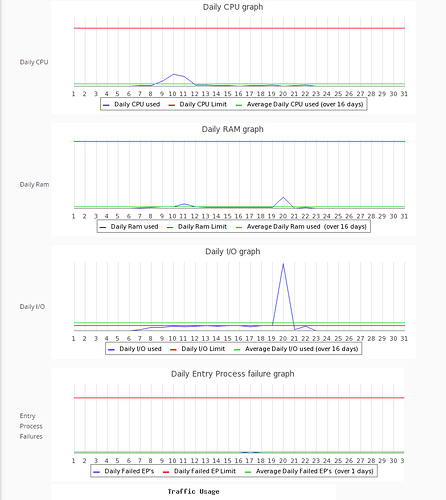 As you see from the above pic, I don’t go over the limit (although at times come close) - until the 20th when there is that massive spike!?

That will cause it. Sometimes the counter is deyaed in showing you results.

Are you sure the delay maybe days? If so, I will continue to do the incremental FTP backups, which if my PC is turned on at 9pm will perform a windows task scheduler running an WinSCP script. Doesn’t automate the DB backup though, but its a start. I’ll do a periodic Akeeba backup - but just the one. I do note that there was one occasion when the akeeba backup seemed to freeze, perhaps that was the task that cause it, if as you say, these stats can be delayed a few days…

Just a heads up, I do have a PHP plugin installed to my joomla backup suite, but my incremental backups are done on a nightly basis using FTP, so from what I have read these will have no bearing on the IO stat

That depends. Most backup plugins first prepare the backup archive on local storage before uploading it to the backup location. That will generate IO usage.

Which is why the article says “avoid backup plugins”. There is no “unless” for using FTP.

I had the same io spike with my site on the 20th too, without doing anything abnormal or out of the ordinary. Of course I got suspended. Mind you I dont use any cms; I have complete control of my code and what it does.
So my best guess is that this is not our fault or our sites’ fault. Something else is at play here…
Iam wondering what can it be?.. … …

I meant I do incremental backup using FTP manually and not via a plugin. I use winscp, using a script on my local machine to copy files that are newer.

What caused that big spike? The 20th - we’ve been penalised for something I suggest wasnt our fault. I don’t mind taking it on the chin as a one off. But I’d like to know if I can fox it somehow. These daily use stats just aren’t detailed enough.

I’ve read on another forum that mysql can be the cause of joomla IO issues, as mysql creates hundreds of temporary tables which in turn uses a lot of IO time.

That graph shows I’m just hovering around the 100% mark on both days. Increasing the limit just a little bit would be enough to stop my site regularly going offline - except for whatever happened on the 20th, which I presume is very rare

If you cannot keep to the limits, then you need to upgrade to premium hosting

Really mate? That’s your input to the conversation? Wow!
Who would have thought of that?! Amazing!

Hit the limit again, even after disabling any backup plugin(s) I had (although the automated part of these hadn’t been activated anyway due to the aes.js thingy).

If anyone here has experience with Joomla and this issue, I’d greatly appreciate a little help. Since I’m confident its not a backup plugin, there must be some other rogue PHP causing this read/write problem.

Finally, I’m making this little list for reference, should anyone else encounter this annoying issue, and because when my site comes back again and I can access FTP, its going to be 1/2am and I’ll be tired and forgetful